About The Catlins Region 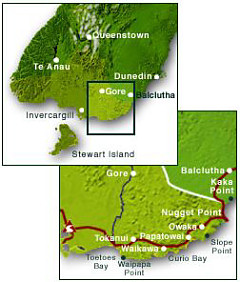 The Catlins region has many attractions, all of which are quite accessible and include beautiful natural scenery, rivers, waterfalls, lakes, caves, forests and beaches. Kaka Point is a great place to stay and from which to explore all of this unique region.

First inhabited by the Maori in the period 900-1700 AD, the Catlins has a rich history. Captain James Cook sighted the area in 1770, but it was not until the period 1810-1830 that whalers and sealers arrived in the Catlins. The Catlins takes its name from Edward Cattlin, a whaling ship's captain who made a land claim in the district in 1840.

Europeans started to settle in the mid 1850's, mainly to mill trees, the first timber mill starting operation around 1865. By the 1880's nine timber mills were operating near the Catlins and Owaka Rivers.

During the 1870's and 1880's many Catlins settlers turned to farming, although the farms were only 20-80 hectares. Gradually the farms grew larger and after the end of the sawmilling era, the Catlins district relied on farming as its mainstay. Now, however, tourism is becoming an important part of the local economy as visitors flock to the region from all over the world to experience this very unique and fascinating part of New Zealand.